A man awakens from a coma, only to discover that someone has taken on his identity and that no one, (not even his wife), believes him. With the help of a young woman, he sets out to prove who he is.

END_OF_DOCUMENT_TOKEN_TO_BE_REPLACED

Playboy Britt Reid (Seth Rogen) becomes the new publisher of Los Angeles’ “The Daily Sentinel” after the sudden death of his father. Britt’s party life is about to change when he and his driver and kung fu expert, Kato (Jay Chou), stop a robbery. With the help of Kato, Britt starts a new career of fighting crime as the masked superhero “The Green Hornet”.

END_OF_DOCUMENT_TOKEN_TO_BE_REPLACED

When a massive power outage plunges the city of Detroit into total darkness, a disparate group of individuals find themselves alone. The entire city’s population has vanished into thin air, leaving behind heaps of empty clothing, abandoned cars and lengthening shadows. Soon the daylight begins to disappear completely, and as the survivors gather in an abandoned tavern, they realize the darkness is out to get them, and only their rapidly diminishing light sources can keep them safe.

END_OF_DOCUMENT_TOKEN_TO_BE_REPLACED

Three types of scary creatures will blow the air out of every movie-goers lungs in the three episodes of Shake, Rattle and Roll XII. Read more on next page.

END_OF_DOCUMENT_TOKEN_TO_BE_REPLACED

Executive Producer Sean Penn presents “Witch Hunt,” a gripping indictment of the American justice system told through the lens of one small town. Voters in Bakersfield, California elected a tough on crime district attorney into office for more than 25 years. During his tenure he convicted dozens of innocent working class moms and dads. They went to prison, some for decades, before being exonerated. He remains in office today. This story on a micro level mirrors what the US has experienced over the last eight years. When power is allowed to exist without oversight civil rights are in jeopardy.

END_OF_DOCUMENT_TOKEN_TO_BE_REPLACED

Pandemic brings us a small town veterinarian who’s discovered something very odd about the local wildlife.  It’s developing a particularly nasty bug that kills within hours (and not too many of them) of exposure.  Worse, this bug not only does horrendous things to critters, it also does likewise to humans. And once the army gets wind of it, well, here we go on the trail to Quarantine Town, with stops in Eventually We’re Going to Commit Mass Murder Village.  So now, our veterinarian is going to have to get to the bottom of all this and hopefully manage to get out alive in the process.

END_OF_DOCUMENT_TOKEN_TO_BE_REPLACED

After Jesse James is wounded by a bullet to the chest, Frank James splits the gang up and plans a rendezvous in four days time. With U.S.-Marshall Kane in hot pursuit, and betrayal within the outlaw band, the stage is set for a blazing and climactic shootout in the deserted town of ‘Gila Wells’.

END_OF_DOCUMENT_TOKEN_TO_BE_REPLACED 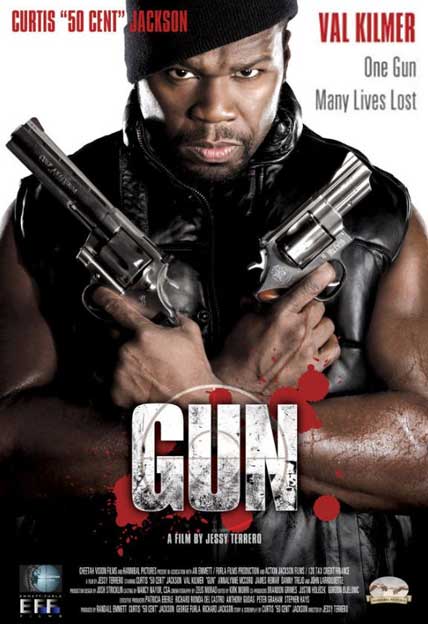 Val Kilmer and Curtis “50 Cent” Jackson is dynamic. The action and acting was spot on. This film pretty much documents the real world in gun trading on the today’s streets showing the relationship between street thugs and police officers. Anna Lynn McCord looked fantastic in this film staring next to 50 Cent. Val Kilmer and 50 Cent really pulls this one off.

END_OF_DOCUMENT_TOKEN_TO_BE_REPLACED

Gutter King is an urban coming-of-age fight drama about a tough street kid just released from the Juvenile Department of Corrections. His new foster father tries to channel the boy’s rage into the world of amateur bare-knuckle brawling, but his jealous brother has other plans.

END_OF_DOCUMENT_TOKEN_TO_BE_REPLACED

When his roommate spends the rent money on Asian hookers. Alex, a 35 year video game tester has to find a new place to live. After a “encounter” with his friends mom, Alex is forced to move in with his grandmother. Trying to save face with his younger co-workers, Alex says that he is living “with three hot babes” (meaning his grandmother and her two roommates).

END_OF_DOCUMENT_TOKEN_TO_BE_REPLACED

A Tough Look at the Responsibilities of Tabloid Journalism. The power of the sensational media is examined in this film by Ecuadorian director Sebastian Cordero. He has created a very disturbing piece of film making, that examines how unscrupulous journalists manipulate the news. “Cronicas” is intensely disturbing and a bit nauseating to watch due to its graphic scenes – Viewer discretion is strongly advised.

Manolo Bonilla, a TV journalist seeking stardom traveled to Ecuador with his assistant Marisa and cameraman to cover the story of the ‘Monster of Babahoyo’, a serial rapist and murderer of small children. As they are filming a strange man Vinicio Cepeda has wandered into town and during the paparazzi effect of Bonilla’s crew filming the mass funeral of the latest victims of the ‘Monster’. Vinicio inadvertently runs over the twin of one of the victims resulting in an outrage by the father of the twins and a beating of Vinicio. Both are jailed and Manolo learns from the incarcerated Vinicio that he has secrets about the Monster. Seeing the chance for a ‘Big Story’ that will assure his stardom Manolo pursues the fragments of evidence about the Monster until little by little he ‘uncovers’ the truth. And the truth is terrifying.

END_OF_DOCUMENT_TOKEN_TO_BE_REPLACED

A History of Violence – DVDRip

Tom Stall is a loving family man and well-respected citizen of a small Indiana town. But when two savage criminals show up at his diner, Tom is forced to take action and thwart the robbery attempt. Suddenly heralded as a hero who took the courage to stand up to crime, people look up to Tom as a man of high moral regard. But all that media attention has the likes of mobsters showing up at his doorstep, charging that Tom is someone else for whom they’ve been looking. Is it a case of mistaken identity, or does Tom have a history that no one knows about? Either way, someone’s about to find out if there’s a history of violence.