Debbie Macomber is a #1 New York Times bestselling author and one of today’s most popular writers with more than 200 million copies of her books in print worldwide. In her novels, Macomber brings to life compelling relationships that embrace family and enduring friendships, uplifting her readers with stories of connection and hope. Macomber’s novels have spent over 1,000 weeks on the New York Times bestseller list. Thirteen of these novels hit the number one spot. Her Cedar Cove series of novel was adapted into the television series of the same name.

END_OF_DOCUMENT_TOKEN_TO_BE_REPLACED

The Mueller Report by The Washington Post AudioBook and eBook

The Crucial #1 New York Times Best Seller! The only book with exclusive analysis by the Pulitzer Prize-winning staff of The Washington Post, and the most complete and authoritative available. Includes a PDF of documents and other reference materials. Listen to the findings of the Special Counsel’s investigation into Russian interference in the 2016 election, complete with accompanying analysis by the Post reporters who’ve covered the story from the beginning.

END_OF_DOCUMENT_TOKEN_TO_BE_REPLACED

George Denis Patrick Carlin (May 12, 1937 – June 22, 2008) was an American stand-up comedian, social critic, satirist, actor and writer/author, who won five Grammy Awards for his comedy albums. Carlin was noted for his black humor as well as his thoughts on politics, the English language, psychology, religion, and various taboo subjects. Carlin and his “Seven Dirty Words” comedy routine were central to the 1978 U.S. Supreme Court case F.C.C. v. Pacifica Foundation, in which a 5–4 decision by the justices affirmed the government’s power to regulate indecent material on the public airwaves.

END_OF_DOCUMENT_TOKEN_TO_BE_REPLACED

Too Much and Never Enough – AudioBook and eBook 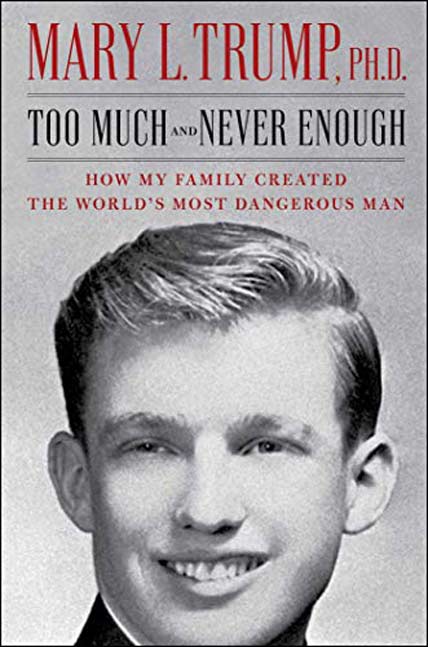 Too Much and Never Enough: How My Family Created the World’s Most Dangerous Man is a tell-all book written by Mary L. Trump, a niece of Donald Trump. It was published on July 14, 2020, by Simon & Schuster. The book provides an insider look to the Trump family dynamics, reveals details about financial dealings, including the author’s work as the anonymous source who revealed the suspected tax fraud to The New York Times. The Trump family launched a lawsuit in an attempt to stop its publication but was unsuccessful in delaying the release of the book.

END_OF_DOCUMENT_TOKEN_TO_BE_REPLACED

If J. J. Abrams, Margaret Atwood, and Alan Weisman collaborated on a series, it might be this awesome. This collection includes all three novels in the epic Southern Reach trilogy: Annihilation, Authority, and Acceptance. Praised for its evocative prose, chilling psychological twists, and intriguing story arc, this series has amassed high critical and popular acclaim, with book one landing on the New York Times best sellers list.

END_OF_DOCUMENT_TOKEN_TO_BE_REPLACED

Achieve optimal healthy living through Dr. Colbert’s Keto Zone Diet. Burn fat, balance hormones, and lose weight.
Wanting or needing to lose weight? The answer is not a pill, medication, or surgery. The answer is a nutritional one that might surprise you. Dr. Colbert, who has been practicing medicine for 30 years, has taken his nutrition, cancer treatment, and weight loss training to a whole new level. Colbert not only helps you lose weight, he helps you plan out a healthy life that you can enjoy!

END_OF_DOCUMENT_TOKEN_TO_BE_REPLACED

Rage goes behind the scenes like never before, with stunning new details about early national security decisions and operations and Trump’s moves as he faces a global pandemic, economic disaster, and racial unrest. Woodward, the number one internationally best-selling author of 13 number-one best sellers, including Fear: Trump in the White House, shows Trump up close in his entirety before the 2020 presidential election.

END_OF_DOCUMENT_TOKEN_TO_BE_REPLACED

n order to develop a secure defense against a hostile alien race’s next attack, government agencies breed child geniuses and train them as soldiers. A brilliant young boy, Andrew “Ender” Wiggin lives with his kind but distant parents, his sadistic brother Peter, and the person he loves more than anyone else, his sister Valentine. Peter and Valentine were candidates for the soldier-training program but didn’t make the cut―young Ender is the Wiggin drafted to the orbiting Battle School for rigorous military training.

END_OF_DOCUMENT_TOKEN_TO_BE_REPLACED

4 CDs of Christmas Songs and Stories for Kids!

END_OF_DOCUMENT_TOKEN_TO_BE_REPLACED

In How Not to Die, Dr. Michael Greger, the internationally-renowned nutrition expert, physician, and founder of NutritionFacts.org, examines the fifteen top causes of premature death in America–heart disease, various cancers, diabetes, Parkinson’s, high blood pressure, and more–and explains how nutritional and lifestyle interventions can sometimes trump prescription pills and other pharmaceutical and surgical approaches to help prevent and reverse these diseases, freeing us to live healthier lives.